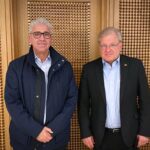 US: Bashagha and Dbeibeh prepared to negotiate political settlement

Libya’s Prime Minister-designate Fathi Bashagha and his rival predecessor Abdul Hamid Dbeibeh are prepared to participate in UN-facilitated negotiations to reach settlement regarding the current political stalemate, the United State confirmed on Saturday.

The announcement came following a meeting yesterday between Bashagha and U.S. Special Envoy and Ambassador to Libya Richard Norland in Tunisia, according to a statement by the American embassy via Twitter.

The talks will focus on “how to manage the final stages of interim governance and prepare for parliamentary and presidential elections as soon as possible,” the embassy said.

“The format and location of talks will be determined by the parties themselves in consultation with the UN and international partners,” it added.

“The U.S. position is clear: we respect the right of Libyans themselves to determine their future,” said the U.S. embassy. “We urge them to do this through exclusively peaceful means without any resort to violence”.