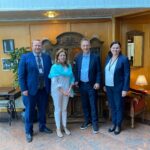 The U.N. Advisor on Libya, Stephanie Williams, met in Oslo today with German diplomat Christian Buck, who could reportedly replace her as head of diplomacy for the United Nations Special Mission in Libya (UNSMIL).

According to a statement by Williams via Twitter, she and Buck discussed “the next steps on the Libyan constitutional track” with the presence of Norwegian Special Representative to Libya, Thomas Rem Berdal, and Director of Middle East and North Africa at the Norwegian Foreign Ministry, Hanne Ulrichsen.

The meeting comes few days after Libya’s House of Representative and High Council of State failed to reach an agreement on constitutional basis for holding national elections in the country. Williams, called on chairmen of both chambers, Aguila Saleh and Khaled Al-Mishri to convene a meeting within 10 days in mutually agreed location to try and bridge the gaps between the two sides.

“We expect a positive response to the UN call for the heads of the two chambers to meet in the next few days to bridge outstanding issues,” Williams said via Twitter.

Williams, who orchestrated the failed talks, is expected to leave her post at the end of June and will be replaced by Buck, according to press reports.