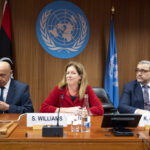 Williams: There was consensus that Libya elections constitute threat to civil peace

Former Special Advisor to the U.N. Secretary General, Stephanie Williams, has stated that, by the time she assume her last role in Libya in early December of last year, “there was widespread consensus that the presidential elections constituted a threat to the country’s civil peace.”

In a policy brief published by the American think-tank Brookings Institution, Williams summed up her analysis of the events which viewed as catalyst for the failure to organize the country’s presidential and parliamentary elections in 2021.

“As I can attest, it is much easier to talk about elections in Libya than to make them a reality. This is in large measure due to the fact that Libya faces a democracy dilemma, a paradox that has impeded progress towards the national polls,” wrote the American diplomat.

“Libya’s democracy dilemma first manifests itself through the rational fear that some potential pres- idential candidates, if elected, will pursue a winner takes all, one-person, one-vote, one-time strategy, resulting in a return to the days of awful dictator- ship,” she added

“Haftar’s attempted coup d’état in April 2019 caused considerable death and destruction and alienated a substantial portion of the population in western Libya – where the majority of Libyans reside,” she stated. On the other hand, she believed that Dbeibeh “acted in bad faith by violating the pledge he took during the February 2021 Libyan Political Dialogue Forum – a pledge made live on-air and in writing – that he would not put himself forward as a candidate for the presidency.”

“By the time I returned to Libya as the Special Advisor to the Secretary General in early December of last year, there was widespread consensus that the presidential elections constituted a threat to the country’s civil peace,” she claims.

From Williams’ perspective, the “second manifestation of Libya’s democracy dilemma” is the “unwillingness” of the House of Representatives and the High Council of State to “produce elections which would likely deprive them of their seats and access to lucrative salaries, benefits and the fruits of patronage.”

She recounted a story of how a “high-ranking member” of the Libyan parliament complained about the elections plans and noted to her Lebanese Parliament had remained in place for twenty years without new elections (from 1972-92), which she interpreted as an indication by the person in question of his desire to remain in his post until 2034.

“I was only half joking in 2020 when I complained about the perfidy of Libya’s political dinosaurs, warning that they needed to make them- selves relevant,” she added.

According to Williams, “it will be difficult to count on Libya’s post-2011 ruling class to produce a solution”. She described this ruling class as a “network of armed groups, business and political actors tend to shoot at each other during the day and collude by night”. She accused them of using Libya’s state and sovereign institutions as “cash cows in what could be described as what former U.N. Special Representative Ghassan Salamé aptly coined as a “redistributive kleptocracy,” bringing into their circles on a regular basis just enough of their compatriots to sustain the system.”