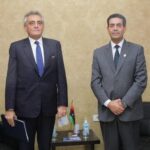 Italy’s ambassador to Libya, Giuseppe Buccino, affirmed on Thursday “the support of the international community and his country’s government for the upcoming Libyan elections.”

This came during a meeting with the Head of the Libyan High National Elections Commission (HNEC), Imad al-Sayeh, with the Italian ambassador at the Commission’s headquarters in Tripoli, where they discussed “the developments of the electoral process, and the commission’s readiness to implement the electoral entitlement at the end of this year,” according to HNEC statement.

During the meeting, Giuseppe praised “the plan announced by the commission to implement the presidential and parliamentary elections simultaneously, and to make the nomination forms available to candidates,” and praised the commission’s efforts to “complete the technical and logistical issues to move towards implementing the electoral entitlement on schedule.”

0 0
Previous : EU working on migration plans for Libya, leaked documents say
Next : 5+5 JMC kicks off new round of talks in Cairo