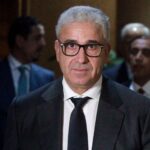 Libya’s Prime Minister-designate Fathi Bashagha revealed on Sunday that he began as started consultations with various political parties to form his government.

In a recorded speech posted on his Facebook page, Bashagha said that he will present his cabinet before the House of Representatives for the vote of confidence “within the specified time” i.e. a week later.

Bashagha praised the incumbent premier Abdul Hamid Dbeibah as a “civil and respectful figure”, adding that he is “convinced” that Dbeibah would agree to a “peaceful transfer of power.”

The premier-designate also revealed that he received calls from leaders of “friendly” countries to congratulate him and express their support for him.

The House had chosen former interior minister Bashagha by a vote on Thursday. However, the incumbent, Dbeibeh, has rejected the parliament’s moves, saying he will only relinquish power after a national election.

Bashagha and Dbeibah, both from Misrata and both candidates for the aborted presidential poll, have the support of rival armed groups in the west.

0 0
Previous : Describing it as “historic”, 118 armed formations from Misurata welcome consensus of HoR and HCS
Next : Oil prices hit their highest in more than seven years