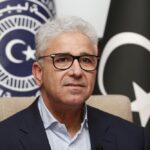 Bashagha says he has no plans to rule from Tripoli

Prime Minister Fathi Bashagha told The Associated Press that he has no immediate plans to rule from the capital of Tripoli, after his attempted move there last week sparked clashes and fears of a return to widespread civil strife.

In an interview late Wednesday, Bashagha said that his government will work from its headquarters in Sirte.

Describing last week’s events, Bashagha said he had entered Tripoli in a civilian car and that those escorting him were unarmed. A young man was killed during the incident. Bashagha identified him as Ahmed Alashabab, calling him a supporter who was defending him from militiamen.

“We do not blame ourselves for having entered the city,” he said. “I had said that I would not enter the capital unless conditions were 100% favorable.”

Bashagha said Abdel-Ghani al-Kikli, a militia leader loyal to Abdul Hamid Dbeibeh, was part of the effort to attack him after he entered Tripoli. Al-Kikli was previously implicated in war crimes by global rights groups, but has headed a nebulous body called the Stability Support Authority that reports to the Tripoli government since 2021.

Bashagha said he doubts Dbeibeh can unite the country and organize orderly voting, claiming his rival does not command enough loyalty outside of the capital.

“He will only be able to hold them in Tripoli,” he said, adding that his own government is looking at holding nationwide elections within 14 months.