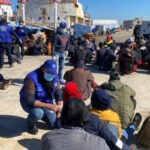 Europe has been accused by a senior international official of acquiescence over the plight of thousands of migrants in Libya held in arbitrary detention in “deplorable conditions”.

Federico Soda, chief of mission at the International Organization for Migration’s mission in Libya, said not enough was being done by outside actors to try to change the war-torn country’s “environment of arbitrary detention and deplorable conditions” for migrants, the Guardian reported.

International observers have reported that people seeking to get to Europe, who are returned to Libya, have been killed, tortured, raped and trafficked in “hellscape” state-run detention centers. A report for the UN Human Rights Council concluded last year that conditions in Libya’s migrant detention centers were a possible crime against humanity.

“Most member states are silent on these issues in Libya,” Soda told reporters in Brussels. “On a number of issues in the country we [the IOM] are the only voice. That is problematic. What concerns me is kind of the acquiescence,” he said, characterizing the attitude as: “‘It’s not a problem on our shore, so let’s just keep it there’.”

The IOM mission chief said there needed to be “more condemnation” and “more calls for law and order for investigations”.

He was speaking after a recent IOM report showed a record 32,425 people attempting to travel to Europe were returned to Libya in 2021, after being intercepted or rescued in the Mediterranean Sea.

0 0
Previous : DPM invites African investors to invest in Libya
Next : Bashagha says he has no plans to rule from Tripoli