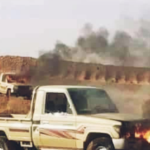 Clashes has renewed between the Libyan National Army (LNA) forces and the Chadian opposition north of Ozo on the border between Libya and Chad, with intensive air force flights.

The Chadian opposition described the battles against it as “aggression which aims to kill its leaders and strike the struggle against the regime in N’Djamena.”

LNA had carried out a military operation that led to eliminating dozens of mercenary groups elements who are engaged in criminal activities in the Southwestern region (Fezzan), according to LNA Moral Guidance Department.

The groups’ vehicles were destroyed in a major operation aimed at eliminating mercenaries in these areas and completing securing the South, controlling the borders of the country and purifying it from the criminals who took advantage of the country’s security situation during the past period, said the Department’s Head, Khaled al-Mahjoub.

The operation was carried out by various military units, including this striking force, backed by LNA Air Force, al-Mahjoub added.

These operations will continue until the mercenaries and terrorist groups, that fled after the strikes they received, are eliminated, he pointed out.

The groups are still working to take advantage of the border in cooperation with other terrorist groups operating in the area bordering the Sahel-Saharan countries, according to al-Mahjoub.

A member of the armed forces was killed during the operation, he said.

LNA had announced yesterday the destruction of several sites and vehicles of the Chadian opposition in the far south in an expanded military operation to end its presence in Libya, in addition to directing several airstrikes on its sites last night.