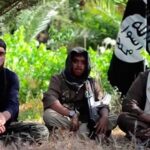 Coinciding with LNA operations, Algeria announces killing terrorists in clashes on its border with Libya

Two Algerian soldiers were killed due to armed clashes with a terrorist group in Hassi Terrine town on the border with Libya, the Algerian Defense Ministry announced.

The Ministry clarified that the operation resulted in the killing of two terrorists and the recovery of a 12.7 mm heavy machine gun, two Kalashnikovs, a four-wheel drive vehicle and a quantity of ammunition of various calibers.

The operation coincided with a military operation launched by the Libyan National Army (LNA) against terrorist groups in Jabal Asida, near Qatrun.

On Friday, LNA Spokesman Major General Ahmed al-Mismari, announced the killing of 24 ISIS militants in the battles of West Qatrun in the southwest.

Al-Mismari confirmed in a press conference that during the operation, an ISIS terrorist was captured and four LNA soldiers went missing.

He pointed out that all possibilities have been directed to eliminate the remnants of ISIS in the southwest, explaining that the terrorist organization is moving in separate groups along the borders with Chad, Niger and Algeria.

0 0
Previous : Security Council expected to extend UNSMIL mandate on Monday
Next : Turkish ambassador from Benghazi: Our forces presence in Libya based on agreement between the two governments, HoR “authorized” to adopt this agreement