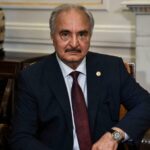 Dbeibeh to discredit Haftar in US court, leaked memo says

Libyan newspaper Al-Marsad said it obtained a copy of a defense ministry memo, which it claimed was written by Dbeibeh. The alleged memo references a document submitted by Haftar’s attorney Lindsay R. McKasson as part of his defense case in the lawsuit against him before U.S. court.

Dbeibeh allegedly says in the memo that Haftar’s attorney has falsely claimed that this particular document was issued by the Libyan defense ministry, which the premier also runs as the acting defense minister.

Dbeibeh allegedly denounced the forged document as a “willful slander in order to mislead justice” which is “a crime punishable by Libyan and American law”.

The prime minister allegedly urged Mangoush to address this issue with the Libyan embassy in the U.S. and file a complaint against Haftar before the American judiciary.