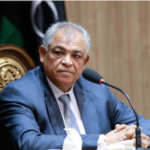 The Libyan First Deputy Prime Minister, Hussein Al-Qutrani, has said he would officially return next Sunday to join the Government of National Unity (GNU) meetings in Tripoli, after he left the Capital to Benghazi last October due to disputes with the Prime Minister, Abdul Hamid Dbeibeh.

It is noteworthy that Al-Qatrani concluded in October a meeting with officials from Cyrenaica, after which a joint statement was issued accusing Prime Minister Abdul Hamid Dbeibeh of violating the Libyan political agreement and the Geneva ceasefire deal.

“The government’s presidency did not abide by the terms of the political agreement, the Geneva outcomes, and the governing principles of the [peace] roadmap,” read the joint statement of Al-Qutrani and Cyrenaica officials.

“There are decisions issued to infringe on the competence of some ministers specified by law,” said the statement. “The government’s presidency did not commit to defining the competencies of the deputy prime ministers, which contributed to strengthening centralization”.