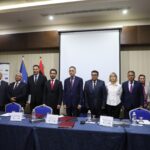 The European Union has launched the E-NABLE project, which objective is to support major Libyan economic institutions in adopting digital economic governance tools and improving digital services provided to companies, according to a statement by the the ministry of economy affiliated with Dbeibeh’s government.

The project, which extends for three years (2022-2025), aims to enhance a stimulating and supportive business environment for investment and strengthen the private sector that in turn would contribute to economic growth in Libya, the EU stated.

Meanwhile, Minister of Economy and Trade Muhammad Al-Hawij highlighted during the launching ceremony the importance of this project to Libyan institutions, saying it supports economic growth and the private sector and allows them to keep pace with digital transformation, which is the foundation of the future, as he put it.

For his part, the EU Ambassador to Libya, Jose Sabadell, said that digitization and keeping pace with governance systems are among the main priorities of the bloc. He disclosed that the EU has invested heavily in this area and is cooperating with partners to move forward with digital transformation, especially in Libya.

The €5 million E-NABLE project will be implemented by Expertise France and includes key Libyan economic institutions, such as the ministries of economy and trade, planning and finance, the Central Bank of Libya, and chambers of commerce.