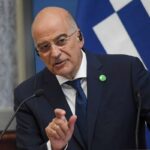 Greece: Libya failed to respect agreement that Dendias will not meet Mangoush

Greece has accused the Libyan Foreign Ministry of failing to respect an arrangement over the visit of Greek Foreign Minister, Nikos Dendias, which led to spat between the two countries.

Dendias arrived at Tripoli airport but refused to disembark from the plane when he realized that waiting to greet him on the tarmac was the Libyan Foreign Minister of the Government of National Unity Najla Mangoush.

In a statement released on hours after the incident on Thursday, the Greek Foreign Ministry clarified that Dendias wanted to only meet with the Chairman of the Libyan Presidential Council, Mohamed al-Menfi, but not with Mangoush.

“The part of the Minister’s visit to Eastern Libya is proceeding as planned,” the Greek ministry added.

For its part, the Libyan Foreign Ministry said it “deplores” Dendias’ cancellation of his trip to Tripoli and later the Tripoli-based government announced that it decided to summon the Chargé d’Affairs of the Greek Embassy to Libya, Ioannis Stamatikos, over the incident.

This diplomatic row follows a rupture of ties between Greece and the Tripoli-based government in the wake of the latter’s decision to sign oil and gas exploration deal with Turkey last October.

The deal sparked strong opposition from Greece and criticism from the European Union and the United States because it is based on 2019 agreement for the demarcation of maritime borders between Libya and Turkey, which, according to EU, violates the maritime rights of third countries such as Greece and Egypt.

FM @NikosDendias' visit to #Tripoli for a scheduled mtg w/ Libyan PC Head, Al-Menfi, has been cancelled as the Libyan MFA failed to respect the agreement made that FM Dendias would not meet w/ Libyan FM
The visit to Eastern Libya is proceeding as planned
➡️https://t.co/jE8mi86fly https://t.co/g9OIujzM4s pic.twitter.com/jzC2YJ3ONU