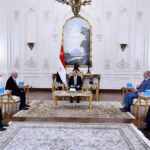 Haftar, Saleh discuss developments in Libya with Sisi of Egypt

Field Marshal Khalifa Haftar, the Libyan National Army’s General Commander, and the Speaker of the House of Representatives (HoR), Aguila Saleh, discussed the latest developments in Libya on Tuesday with the Egyptian President, Abdel Fattah Al-Sisi, in the presence of the Egyptian Intelligence Chief, Abbas Kamel, in Cairo, according to the Egyptian Presidency.

Al-Sisi affirmed that Egypt will continue its efforts to coordinate with all Libyan brothers during the coming period, in a way that contributes to ensuring the unity and cohesion of Libyan national institutions, leading to holding the important parliamentary and presidential elections expected by the end of this year, as well as preventing foreign interventions that aim primarily to implement their special agendas at the expense of the Libyan people, as well as the expulsion of all foreign forces and mercenaries from Libyan territory, said the Official Spokesman of the Egyptian Presidency.

For their part, the two Libyan officials expressed their great appreciation for the leading Egyptian role, and for its tireless and sincere efforts to support its brothers in Libya since the outbreak of the crisis until now within the framework of the extended and fraternal relations linking the two brotherly countries and peoples, the Spokesman pointed out.

The Libyan leaders also confirmed the consistency of their positions with the Egyptian perspective on managing the Libyan transitional period, especially with regard to the need to ensure holding presidential and parliamentary elections before the end of this year, in parallel with strengthening the security track by obligating foreign parties to expel mercenary elements from Libya, he added.

The meeting witnessed a review of prospects for cooperation and coordination between the two brotherly countries during the coming period at all levels, according to the Spokesman of the Egyptian Presidency.