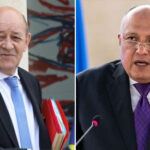 Egyptian Foreign Minister Sameh Shoukry stressed the importance of holding presidential and parliamentary elections in Libya simultaneously while preserving the Libyans’ ownership of the political solution.

This came during a phone conversation Tuesday with French Foreign Minister Jean-Yves Le Drian, according to a statement by the Egyptian Ministry of Foreign Affairs, according to which the two ministers discussed developments in the situation in Libya.

Sameh Shoukry called for stopping foreign interference and expelling all foreign forces, mercenaries and foreign fighters, without exception, within a specific time frame, in implementation of the relevant international resolutions, and in accordance with the outputs of the Berlin Process and the Paris Summit.

0 0
Previous : HoR sets 13 conditions for running for prime minister position
Next : Public Prosecutor: Health Minister and Undersecretary imprisoned with sufficient evidence against them