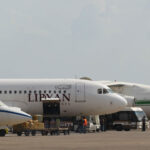 The interior ministry have suspended domestic flights in Libya’s eastern region of Cyrenaica, a Libyan airline company revealed on Friday.

Berniq Airways, a Benghazi-based airline company, said on its official Facebook page that Deputy Interior Minister Faraj Qaim has directed the country’s Civil Aviation Authority to suspend all but charter flights in Cyrenaica “until further notice”.

The airline firm did not disclose the reason behind the abrupt suspension.

Tensions have been growing inside the Libyan government between Prime Minister Abdul Hamid Dbeibeh and Cyrenaica officials who accuse the premier of consolidating power by undermining the representation of the eastern region in his cabinet.

Qaim, another government official from Cyrenaica, has sparked the controversy after accusing Dbeibeh of sabotaging the elections on December 24 and minimizing the role of Cyrenaica officials in his cabinet.