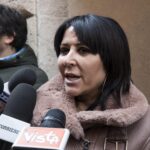 “The migration crisis requires a serious approach and cooperation between the two shores of the Mediterranean,” declared Italian Senator Marinella Pacifico as reported by her country’s AgenPress.

Pacifico reportedly made her remarks following a recent meeting in Rome with spokesman for the Tripoli-based government, Mohammed Hamouda. According to her, Hamouda “expressed the need for a structural intervention aimed at creating jobs and improving the standard of living of young people in the countries from which migrants leave, as well as intervening on the Maghreb coast.”

“It is clear that Libya cannot be left alone to manage this humanitarian crisis,” stated the 60-year-old political who also serves as secretary of the Schengen, Europol and Immigration Parliamentary Committee.

“Common action is needed between countries of origin and transit of migratory flows because the emergency solutions adopted up to now have not given the desired results,” she said. “Closing ports can be a deterrent, but push-backs are just a patch that is turning out to be worse than the hole. The Libyan coast guard, albeit with its frailties, has shown great proof of saving lives at sea.”

0 0
Previous : Aqila Saleh: GNU failed to run the state affairs
Next : With no accountability of her own, Williams accuses Libyan political class of corruption