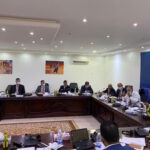 The Libyan Foreign Ministry discussed in a meeting in Tripoli with the European Union Mission in Libya ways to enhance and support border security and management, develop search and rescue operations, and combat smuggling and human trafficking networks.

The meeting discussed following-up on mechanisms for implementing what was previously agreed upon between the two sides regarding providing technical and logistical support to the Libyan side, in addition to discussing the proposals and requirements submitted by the Libyan side to contribute to supporting land and sea border security, Libyan Foreign Ministry said in a statement.

The meeting also discussed the importance of completing the implementation of project to establish a communications system to enhance support for border security management, and to complete linking operations and control rooms to the communications network, in addition to rehabilitating and developing the Libyan Naval Academy, and equipping the Search and Rescue Center, , according to the information office of the Ministry.

This came during a meeting held at the headquarters of the Libyan Foreign Ministry, which was chaired on the Libyan side by the Director of the European Affairs Department at the Ministry of Foreign Affairs, Muhammad Al-Maqhour, and attende by a representative of the Coast Guard, members of the National Border Security and Management Team, in addition to advisors from the Ministries of Interior and Transportation, the Communications Authority and the Customs Authority, and on part of the European Union Mission for Border Assistance Management (EUBAM), “Yans Anderson”, Deputy Head of Mission, with participation via Zoom technology of representatives of the European Union Mission to Libya and the European Union Commission.