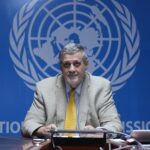 The Inability of the Libyan Political Dialogue Forum (LPDF) to reach an agreement on the constitutional basis for the elections “risks resulting in depriving once again the Libyan people of their right to democratically elect their representatives and restore the long-lost legitimacy of Libyan institutions”, said the U.N. Envoy to Libya Jan Kubis on Wednesday.

Speaking during an LPDF virtual meeting, Kubis called on the forum’s members to “listen carefully” to four proposals on constitutional basis, from which the members would vote to choose one.

“In considering the proposals and next steps, it is necessary to fully respect the requirement that none undermines your promise to the Libyan people to hold elections within the timeline set by your roadmap,” he said.

“It is your responsibility and duty to find common ground,” stressed the U.N. Envoy.

“Neither the UN nor the international community at large can replace your own political will to move past your differences, live up to your responsibilities, and focus on the most important objective which is to develop a constitutional framework for free, fair, transparent, and inclusive elections.”

Kubis revealed that will travel again to Libya “very soon” for “consultations with key political and other stakeholders”.

“Following which I plan to convene another meeting of this Forum, most likely a physical one provided you signal readiness to work for a compromise,” he added.