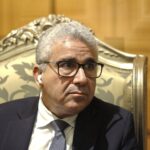 Bashagha pleads for more US involvement in Libya

Former Interior Minister Fathi Bashagha has called on the United States to enforce “stiff and immediate sanctions against anyone who tries to obstruct the country’s electoral process, even if those individuals currently hold positions in the Libyan state.”

In an article he wrote on Tuesday for the Financial Times, the probable presidential runner stated that “free and fair elections are just the beginning of a process that will take years — and one that will require leaders who can secure and unify a country that has been marred by deep divisions.”

“One immediate priority must be to resolve the differences between the western and eastern parts of our country,” he wrote. “We must also ensure an equitable distribution of oil revenues, root out corruption at the national central bank and restore trust among international businesses that it is safe to return to the country.”

The former minister concluded by appealing to the administration of U.S. President Joe Biden to “help Libya by sending a clear message that those who stand in the way of free elections will be punished, and that the US stands for peace and democracy in a country that has been devastated by war and corruption.”

The US must step up and prevent a return to chaos in Libya https://t.co/x9EMspQJcM | opinion