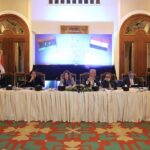 he Libyan Constitutional Track Committee, comprising the House of Representatives and Higher Council of State, concluded its meetings today in Cairo under the auspices of the United Nations and Egypt, announced the U.N. Mission in Libya (UNSMIL).

“Over the course of one week, consultations took place between the committee members in a climate of consensus discussing several issues, including agreement on the internal regulations governing the work of the Committee and agreement to meet after Eid al-Fitr to continue the consultations,” said U.N. Advisor Stephanie Williams in a statement releaesd by UNSMIL.

Williams explained that, while the Constitutional Track Committee held several closed-door internal meetings, “the United Nations also facilitated general consultations, during which our group of experts provided technical clarifications on a number of important constitutional issues, citing constitutional experiences from several countries in the region and the world.”

This round of consultations on the Libyan constitutional track is held within the context of the U.N. initiative launched in early March with the aim of moving forward a constitutional and legislative framework for presidential and parliamentary elections.

The U.N. did not disclose when the following round of talks will begin.