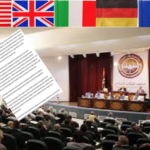 U.S., U.K., France, Germany and Italy said in a statement on Sunday that passing law by the Libyan House of Representatives (HoR) for presidential election represents a significant step towards holding presidential and parliamentary elections on 24 December 2021.

The statement also commended progress made by the High National Elections Commission (HNEC) on the preparations for holding the elections.

Free and fair parliamentary and presidential elections on 24 December, 2021 are an essential step in further stabilizing and uniting Libya, and their results should be respected by all, it added.

“In this regard, we welcome the actions by the Government of National Unity (GNU) to facilitate the preparations for the holding of elections especially providing the adequate funding for HNEC and various security preparations,” the statement pointed out.

“We stand ready to support, at their request, the interim Libyan authorities in the organization of the elections,” it stressed.

“We call for the full compliance of all actors with UNSC sanctions, including through national implementation measures against those who are found to be in breach of the UNSC arms embargo or the ceasefire, threaten the peace, stability or security of Libya or obstruct or undermine the successful completion of its political transition, including those undermining elections planned for in the LPDF Roadmap,” it concluded.