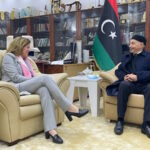 Saleh to Williams: Interference to affect Parliament’s decisions is not accepted

Libyan Parliament Speaker Aqila Saleh affirmed to UN Special Adviser on Libya, Stephanie Williams, that he did not accept interference to affect the Parliament’s decisions, according to Spokesman, Abdulla Bleihiq.

Saleh told Williams during their meeting in his office in al-Qubba that the Parliament’s resolutions do not need to be credited from any party, Bleihiq added.

The Parliament Speaker confirmed the legality of the measures taken, whether the procedures for the twelfth constitutional amendment and the road map or the formation of the new government after the end of the mandate of the Government of National Unity (GNU), led by Abdul Hamid Dbeibeh.

Saleh stated that these procedures were taken after agreement with the High Council of State through the two committees formed by the Council and the Parliament, according to Bleihiq.