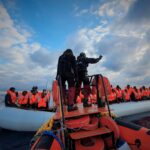 The first 121 who were aboard a dinghy in distress in the central Mediterranean were rescued during early morning hours of Saturday.

“Our crew spotted the boat in distress and launched our RHIBs [rigid inflatable boats] to evacuate the people from the unseaworthy boat,” Sea Watch said via Twitter.

Then, Sea Watch’s airplane crew spotted a small boat carrying 8 people whom were saved in a second rescue operation.

“On board our ship, the crew is now providing a total of 129 people with basic necessities such as medical care, food and fresh clothing,” Sea Watch said.

🔴 The #SeaWatch4 has taken 121 people on board in a first rescue operation.
In the early morning hours, our crew spotted the boat in distress and launched our rhibs to evacuate the people from the unseaworthy boat. pic.twitter.com/1zW7cks2p8