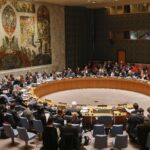 The U.N. Security Council voted unanimously on Friday to extend the U.N. political mission in Libya for three months after Russia objected to a one-year extension supported by other members.

Nebenzia said in the absence of a new envoy, the U.N. mission “has been unable to provide substantial support for the political process in Libya for more than six months”.

He blamed some unidentified members of the Security Council who he claimed were “not ready to accept a scenario where UNSMIL is guided by an African representative”.

Britain’s U.N. Ambassador Barbara Woodward, who oversaw negotiations on the resolution, said after the vote “Russia has once again isolated itself by not joining consensus with the 14 other members of the council” who supported a one-year substantive mandate.

After Kubis resigned, Guterres appointed American diplomat Stephanie Williams, a fluent Arabic speaker who served as deputy U.N special representative in Libya from 2018-2020, as his special adviser and sent her to Tripoli. She oversaw the agreements on the ceasefire and transitional government and told reporters after the meeting in Cairo the two sides had agreed to reconvene in May.

UN deputy spokesman Farhan Haq said Ms Williams, whose contract is set to expire, was expected to continue in her role “until we have any further notice to give you”.