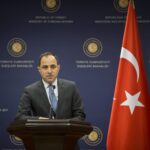 Turkey: EU remarks on hydrocarbons deal with Libya “have no importance or value”

Turkey on Tuesday lashed out at Brussels and Athens for their stern objections to a hydrocarbon exploration deal Ankara signed with Libya, saying that the European Union and its member states should “not overstep their boundaries and powers.”

“Objecting to a pact signed by two sovereign states is against international law and the basic principles of the United Nations,” a spokesman for Turkey Foreign Ministry was quoted by the state-run Anadolu Agency as saying.

“The Greek and EU remarks on Turkey’s agreement with Libya on hydrocarbons have no importance or value,” he added.

The European Union have declared that Turkey’s agreement with Libya is “against Law of the Sea and infringes on third states’ rights.”