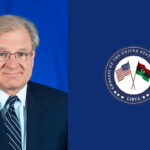 U.S. Embassy: Libya is ready for December elections from technical point of view

Date: Monday, September 20, 2021
49 Views
The Embassy of the United States in Libya congratulated the Libyan High National Elections Commission (HNEC) on “continuing to put in place all the technical arrangements for a successful election on December 24.”
“This is further confirmation that Libya and Libyans are ready for the elections from a technical point of view,” the Embassy tweeted on Monday.

It is noteworthy that HNEC had announced that the final number of registered voters at home and abroad reached 2,865,624, coinciding with the announcement of the closure of the registration system for elections abroad.
The final number of voters included 1,628,305 men and 1,237,319 women, HNEC said in a statement on Saturday, noting that the number of voters registered at the registration system abroad reached 10,729.
HNEC pledged that it would assume all its responsibilities in order to achieve the highest levels of confidence and integrity in implementing the elections scheduled for December 24.
It also noted that it was preparing to launch the next stage, which is to deliver the ballot papers to the voters, through the polling stations in which they have registered.
The Commission called on all partners from civil society organizations, media, state institutions, and citizens in general to help in the success of the next stage by contributing in awareness campaigns and motivating voters to receive their cards so that they can participate in the voting process.
Tags:HNECLibya electionsU.S.U.S. Embassy - Libya