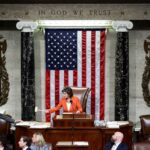 US passes bill enabling sanctions on foreign actors in Libya

The US House of Representatives has passed a bill that could sanction foreign actors supporting rival factions in Libya.

The House on Tuesday voted 386 to 35 in favour of the Libya Stabilization Act, introduced by Democrat Ted Deutch and Republican Joe Wilson.

According to the bill, sanctions can be imposed on “foreign persons leading, directing, or supporting certain foreign government involvement in Libya … foreign persons threatening the peace or stability of Libya … [and] foreign persons who are responsible for or complicit in gross violations of internationally recognised human rights committed in Libya”.

The bill also allows US President Joe Biden to defer the sanctions if he “determines that the parties to the conflict in Libya have agreed to and are upholding a sustainable, good-faith ceasefire in support of a lasting political solution in Libya”.

Deutch, who co-sponsored the bill, described as a “bipartisan bill to deter foreign interference in Libya, promote diplomacy, conflict resolution, and human rights, and ensure a peaceful democratic transition for the Libyan people.”