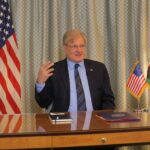 US urges de-escalation in Libya amid political and security tensions

The United States has called for de-escalation in Libya as uncertainty looms over the future of the country after the parliament announced postponement of the elections while armed groups in Tripoli mobilize forces.

“U.S. Special Envoy and Ambassador to Libya Richard Norland urges calm and encourages steps that can continue to de-escalate the tense security situation in Tripoli or elsewhere in Libya,” the U.S. Embassy said in a statement on Wednesday.

“Now is not the time for unilateral actions or armed deployments that risk escalation and unintended consequences detrimental to the security and safety of Libyans.”

“The United States shares the concern and disappointment of the vast majority of Libyans who expect to have the opportunity to vote for their country’s future,” the embassy stated.

“Libyan leaders, on behalf of the Libyan people, should expeditiously address all legal and political obstacles to hold elections, including finalizing the list of presidential candidates.”