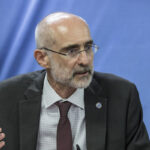 Africa Intelligence website revealed that Washington is pressing to impose diplomat Kenneth Gluck as deputy head of the United Nations Support Mission in Libya (UNSMIL), to replace Rezidon Zeninga, who will leave next January.

Kenneth Gluck had held the second position in the United Nations Multidimensional Integrated Stabilization Mission in Central Africa Republic from 2017 to 2019, according to the French website.

Gluck also worked in the United Nations Support Mission in Yemen, and worked with Doctors Without Borders for a long time in Somalia and Sudan, said Africa Intelligence.

The position of deputy head of UNSMIL has become, in recent years, a strategic position for Washington, with the aim of monitoring the Libyan file, the Website pointed out.

This position was previously held by US diplomat Stephanie Williams, after which she held the position of acting head of mission, and then the position of Special Adviser to the UN Secretary-General in Libya.

0 0
Previous : Libyan government to form defense team for Marimi in Washington, says minister
Next : US accused of illegal abduction of Lockerbie bomb suspect from Libya