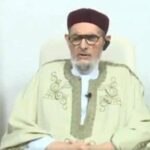 Ghariani calls on Libyans to follow Taliban example in Afghanistan

The former Grand Mufti of Libya, dismissed by the House of Representatives (HoR), al-Sadiq al-Ghariani, has announced his rejection of the request of 5+5 Joint Military Committe (JMC) to freeze military agreements with all foreign countries, including Turkey, and expulsion of foreign forces from Libya, and called on the Libyans to follow the example of the Taliban movement, which seized power in Afghanistan.

“Demanding the exit of foreign forces is a great calamity, and I join those who are ready for war,” Ghariani said in a televised interview on Wednesday.

Several armed groups and commanders in the Western region had rejected the 5+5 JMC request, including Commander of the Western Military District of the former Government of National Accord (GNA), Osama Juwaili, who announced his “categorical rejection” of the Committee’s request.

Turkish Defense Minister, Hulusi Akar, implicitly responded to 5+5 JMC request to freeze military agreements and memoranda of understanding, with Ankara and Moscow, considering that “Turkish military forces in Libya are not foreign.”

On the other hand, a number of Libyan political parties have released a joint statement on Tuesday, in which they expressed their support for the 5+5 JMC and its demand to freeze all military deals with foreign countries.

5+5 JMC had agreed on an “emergency plan” for the withdrawal of mercenaries and foreign forces. It also made an official request to HoR, the Government of National Unity (GNU), and Presidential Council to “freeze military agreements and memoranda of understanding with any country as stipulated in the ceasefire agreement signed in Geneva”.