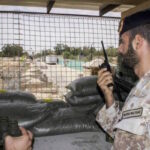 The Italian military in Libya is blocked by the Libyans, who are making money on visas for the new contingent, which was supposed to replace “our men”, reported the Italian newspaper il Geornale.

There is a proposal for return flights in February, but only one proposal. There will be Islamic holidays in March and the risk is that everything will stop, the newspaper said.

Italy has 400 men, 142 land vehicles and 2 air vehicles in Libya. About 250-300 men are in Misrata with a field hospital, but they cannot return, despite the end of their mission period, it added.

The Libyans also played a similar trick on Italians last year and only three months late the troops were able to take over. Italians are blackmailed by a nation to which Italy should give support on several fronts. according to il Geornale.

The Italian mission provides health care, support to the Libyan armed forces and support for the fight against illegal immigration with a navy ship at the Abu Sitta naval base in Tripoli, it pointed out.

The “blackmail” of visas is only the tip of the iceberg of significant critical issues resulted from lack of collaboration with the Libyan authorities.

Currently it would seem that the scheduled departures for current contingent return to homeland scheduled for January are undergoing further delays as the flight plans of January 5 and 11 have been canceled, the Italian newspaper noted out.