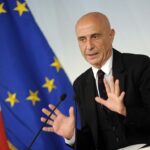 Libya could turn into another Syria if elections fail, warns Italian ex-official

The former Italian Minister of Interior, Marco Minniti, has warned the Libya would face a similar fate to Syria if the upcoming elections on December 24 did not go ahead.

“If we don’t act quickly, it will be difficult to hold elections in Libya on December 24, and if the elections do not take place, the stakes of fresh escalations would be very high,” he told German newspaper Die Welt.

“There is the possibility of dividing Libya into Turkish and Russian spheres of influence,” he added.

Minniti, who is currently heading the Leonardo Group Foundation for Research in Europe, believes that the only way forward for Europe “first and foremost” is to introduce a charter for migration and economic development with Tunisia and Libya.

“We must move quickly, and the issue cannot be postponed,” says Minniti. He also called on Libya and Tunisia to intensify the war against human traffickers.