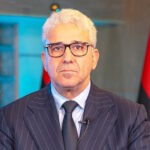 The new Libyan government, led by Fathi Bashagha, has strongly condemned the “criminal acts” that took place since Wednesday evening, which included closing the airspace to prevent the new government ministers from reaching Tobruk to take the legal oath before the Parliament in order to receive their duties.

The government considered these actions the first breach of the ceasefire agreement signed in 2020.

The government said in a statement, “These illegal measures led to the disruption of medical trips for several citizens, which is a flagrant violation of constitutionally guaranteed human rights.”

The government stated, “The same parties targeted the ministers and kidnapped and intimidated a number of them, where the Minister of Foreign Affairs and the Minister of Culture were detained, while the rest managed to reach Tobruk to take the oath.”

The government said, “We renew our categorical rejection of such illegal behavior, and we stress that this will only increase our determination to complete the path of unity, construction and peace.”

0 0
Previous : UN adviser calls for refraining from acts of escalation and violence in Libya
Next : Libya Oil Ministry objects to NOC’s suspension of oil exports