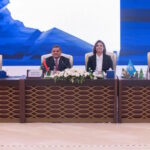 Libya Stability conference has begun in Tripoli, with regional and international participation, as Libyan officials stressed the importance and significance of the conference’s convening in Tripoli.

Prime Minister of the Libyan Government of National Unity (GNU), Abdel Hamid Dbeibeh, said that “the stability of Libya is the only way to build the political and military institutions,” expressing his appreciation for “the support of the international community to resolve the crisis in Libya and restore stability to it.”

“GNU came for the stability of Libya, after years of divide,” Debeibeh stressed, referring to the upcoming elections, calling on Libyans to “actively participate in the elections and respect their results.”

“We support the High National Elections Commission (HNEC), to conduct the elections on its scheduled date,” he continued.

The Prime Minister also addressed the mercenaries present in Libya, stressing that it is a “file that worries the Libyans.”

For her part, the Libyan Foreign Minister, Najla Mangoush, said that the Libyans “look forward to a long-term partnership with the international community,” stressing the importance of holding the “Libya Stability” conference in Tripoli.

“The symbolism of this meeting is important and historical for the Libyans. The conference held in Tripoli is an extension of the efforts of the Berlin conferences,” she added.

With regard to stopping terrorism and hostilities in Libya, Mangoush said: “We are concerned with confronting the phenomenon of extremism and terrorism in Libya,” while Dbeibeh stressed that “friendly countries provided vital support to Libya, which contributed to stopping the war.”

In turn, the Under-Secretary-General of the United Nations, Rosemary DiCarlo, said that UN “supports the departure of mercenaries and foreign forces from Libya,” considering that “the elections should lead to the unification of the military institution in the country.”

For his part, Kuwaiti Foreign Minister Sheikh Ahmed Nasser Al-Sabah called for “the gradual and simultaneous removal of all mercenaries and foreign forces from Libya, adding: “We affirm our commitment to Libya’s unity and sovereignty and reject foreign interference in its affairs.”

He also touched on the elections file, saying: “There is an Arab keenness to hold the Libyan elections on time.”

0 0
Previous : U.S. reiterate its support for Libya elections upon official’s arrival in Tripoli
Next : PHOTOS | Reception of delegations participating in Libya Stability Conference in Tripoli