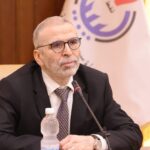 The state-owned oil company said in a statement that a group of people, which it did not identify, had entered the facilities the previous day and prevented employees from working.

The takeover of the field, located in the southwest of the country, appears to be an action against the Tripoli-based prime minister Abdul Hamid Dbeibeh.

The dizzying developments in Libya’s oil fields have come amid a mounting standoff between two rival governments, one led by Dbeibeh and the other by parliament-backed Fathi Bashagha, which threaten to again drag the country into chaotic infighting.

0 0
Previous : Bashagha government welcomes statement of Misurata military leaders
Next : Ex-CEO of LPTIC: I was arrested by Dbeibeh for rejecting $47M deal