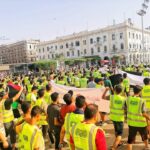 The UN secretary general, António Guterres, has appealed for calm as street demonstrations spread across Libya in protest over power cuts and the failure to hold national elections.

Talks between the Libyan factions in Geneva convened by the UN special adviser Stephanie Williams made progress last week but without agreement on a constitution for the elections.

On Friday night, protesters stormed the parliament in the eastern city of Tobruk as anger exploded over deteriorating living conditions and the political deadlock.

“The secretary general is following with concern the demonstrations that held in several cities in Libya, including Tripoli, Tobruk and Benghazi,” the office of Guterres said in a statement.

The UN chief called on protesters “to avoid acts of violence and on the security forces to exercise utmost restraint”.

According to the statement, Guterres also urged “Libyan actors to come together to overcome the continued political deadlock”, which was negatively “deepening division”.