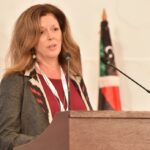 France, Germany, Italy, the United Kingdom, and the United States reiterated on Friday their support for UN mediation efforts  to sustain to facilitate dialogue between Libyan parties in order to hold presidential and parliamentary elections “as soon as possible”.

This comes in the wake of a new mediation plan by Stephanie Williams, UN chief Antonio Guterres’s special adviser on Libya.

In an announcement on Friday, she said she had asked Libya’s House of Representatives and the High Council of State (HCS) to nominate six delegates each to form a “joint committee dedicated to developing a consensual constitutional basis”. According to the UN diplomat’s plan, the committee will convene on 15 March to work for a two-week period to achieve this goal.

In a joint statement, the five countries called on the House and the HCS to “cooperate fully with these efforts and in the next steps of the transition, as proposed by the UN, in order to establish a consensual constitutional basis that would lead to presidential and parliamentary elections as soon as possible.”

“We reaffirm our readiness to work with Libya and all international partners to build a more peaceful, stable future for the country and its people and to support its stability, independence, territorial integrity, and national unity,” concluded the statement.

Joint Statement on the Situation in #Libya https://t.co/s7qpCfXvxz