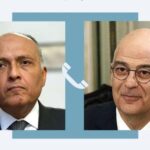 The foreign ministers of Greece and Egypt has challenged the legitimacy of the Libyan outgoing government led by Abdul Hamid Dbeibeh on signing energy memoranda of understanding with Turkey.

Greek Foreign Minister Nikos Dendias announced Monday that he spoke with his Egyptian counterpart, Sameh Shoukry, regarding the recent developments in Libya. “We both challenged the legitimacy of the Libyan Government of National Unity (GNU) to sign the said MoU. It was also agreed that Ι will visit Cairo for consultations on Sunday,” Dendias tweeted.

GNU and Turkey signed Monday in Tripoli two memorandum of understandings on hydrocarbons.

During his visit, Cavusoglu met with Libyan outgoing Prime Minister Abdul Hamid Dbeibeh at the government headquarters, where the signing ceremony took place.

According to sources of The Libya Update, Aoun claims that the Libyan outgoing premier made that move “to pass suspicious oil agreement with Turkey to exploit oil and gas in offshore area near Tobruk in eastern Libya.”