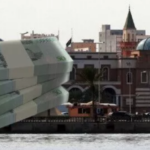 As for subsidies (Chapter Four), 17 billion dinars were spent on it, and an exceptional budget was spent for the National Oil Corporation at a value of 19.2 billion dinars, and no funds were allocated for Chapter Five (emergency).