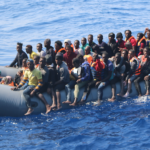 Mediterranean: Alarm Phone NGO alerted to over 670 migrant boats in distress in 2022 – report

This increase in alerts to boats in distress reflects an overall increase in crossings as well as a growing awareness of the Alarm Phone among communities ‘on the move’, it added.

This increase highlights that despite European efforts to build up, finance, and equip the so-called Libyan coastguard over recent years, and despite intensifying cooperation between European and Tunisian authorities, people continue to succeed in escaping across the sea, the NOG pointed out.

The vast majority of people arriving in Italy arrived autonomously or were rescued only a few nautical miles off Italian coasts. People on the move have adapted to European forms of non-assistance where they cannot expect to be rescued by European authorities over considerable distances, especially in the Maltese Search and Rescue (SAR) zone.

According to the UNHCR, only 430 people were rescued to Malta, showing once more the reluctance of the Armed Forces of Malta to engage in rescue operations.

Despite the high number of arrivals, tens of thousands of people were not able to reach Europe, being abducted at sea and returned to the places they tried to escape from.

Tunisian coastguards have repeatedly engaged in dangerous interception operations, some of which have ended deadly. According to the Forum Tunisien pour les Droits Économiques et Sociaux (FTDES), about 29,000 people were returned to Tunisia until the end of October 2022.

The IOM estimates that about 24,700 people were returned to Libya from the sea.

The withdrawal of European rescue assets and the systematic non-assistance of boats in distress at sea have cost lives at sea, Alarm Phone said.

The IOM estimates that 1,377 people have died or disappeared in the central Mediterranean in 2022 – of course an undercount as many deaths and disappearances are never accounted for.

“Family members regularly contact Alarm Phone in their desperate search for their loved ones and many, including families in Zarzis/Tunisia, have taken to the streets to protest EU border violence and demand answers from the European and Tunisian authorities about their missing children.”