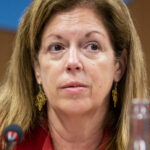 The U.N. Secretary-General’s Special Advisor on Libya, Stephanie Williams, will leave her post on Sunday, July 31, announced the United Nations on Friday.

Farhan Haq, Deputy Spokesman for the Secretary-General, was speaking to reporters during a press conference yesterday when he confirmed Williams’ departure. However, he said the U.N. is yet to decide on a replacement.

“We’re trying, as soon as we can, to have at least an interim person named to do the sort of task that Stephanie Williams was doing, but I don’t have anyone to name for you then,” Haq said, addressing reporters.

“As you know, we do have a functioning UN Support Mission in Libya (UNSMIL).  The officer in charge of that mission is the same as it’s been, which is Raisedon Zenenga, and so he will continue to be the officer in charge until we can name someone else,” he concluded.

Last Thursday, the U.N. Security Council voted to extend the mandate of UNSMIL for three months. The short extension was a result of Russian objections who insist that a new UNSMIL head is chosen before it agrees to a longer extension.

Member States of the  Security Council have had long-running disagreement over UNSMIL leadership since the last U.N. Envoy Jan Kubis left office last year. This led the U.N. Secretary General Antonio Guterres to appoint Stephanie Williams as his Special Representative in the meanwhile.

The lack of an UNSMIL head has left a vacuum which analysts say has contributed to the current Libyan political and military crisis.