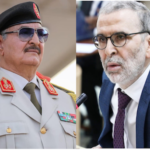 Date: Saturday, September 11, 2021
73 Views
The National Oil Corporation (NOC) announced the resumption of crude export operations on Friday morning, in both Esidra and Ras Lanuf ports, after a shutdown which lasted a day.
It was perpetrated by groups of demonstrators without any legal basis who issued misleading media statements and deceived and exploited a group of young people, according to NOC.

Despite the delay in shipping resulting from this temporary shutdown, production from all fields was not reduced. The patriotic role played by the Libyan National Army (LNA) General Command in restoring security in both ports must be recognized by all Libyans, NOC said in a statement on Friday.

For his part, the Chairman of the National Oil Corporation (NOC), Mustafa Sanalla, stated: “Since the February 2011 revolution, the NOC has been the faithful guardian of the Libyan oil wealth and a solid rock upon which the waves of the ambitious and the corrupt individuals crashed.”
“It is clear that, for some, loyalty and devotion to the homeland are just words they repeat, but it hurts and angers me this time to see a Libyan official planning and another participating in shutting down the ports for narrow purposes and agendas that do not serve the Libyan national interest.”
“We cannot accept or turn a blind eye to practices that undermine the foundations of public service and ignite discord within it, and we will never be satisfied with the politicization of the NOC and its use as a bargaining chip by some politicians and influential people to realise agendas and interests that are not geared towards the national good, NOC Chairman added.

“We call upon law enforcement authorities to take the necessary measures to investigate the facts and to do everything required to bring them to justice.”
“We affirm that the areas adjacent to the NOC Oil operations need special care and attention from the state, and that the NOC has historically played its role in the sphere of corporate social responsibility in light of the budgets made available to it. Creating jobs and pursuing economic prosperity are among the priorities that must be focused on to achieve stability throughout the country,” Sanalla pointed out.

0 0
Previous : Elforjani urges Libyans to get ready for December elections
Next : Maiteeq calls on all Libyan parties to support Presidential Election Law