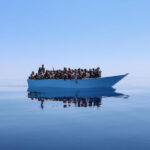 Tunisian authorities said Monday they intercepted or rescued over 200 migrants trying to reach Europe by sea at the weekend, including an entire extended family from the economic crisis-hit country.

Two-thirds of them were from sub-Saharan Africa and the rest were Tunisians.

Defence ministry spokesman Mohamed Zekri told AFP that 42 Egyptians who had set sail from neighbouring Libya were rescued Sunday off Kerkennah, central Tunisia, after their boat sank and they took refuge on an oil platform.

After a similar incident in the same zone the previous weekend, 10 Tunisian migrants were feared to have drowned while 20 were saved.

Tunisian authorities also said 15 members of a family from Hammamet in central Tunisia, including five women and four small children, were prevented from heading out to sea on Friday night.

Tunisia and Libya are the main points of departure for migrants trying to reach Europe from Africa.

Tunisia is in the throes of political and economic crises, and Libya has been gripped by lawlessness since 2011 that has seen militias turn to people trafficking.