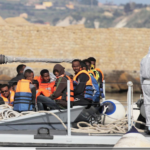 Date: Sunday, November 6, 2022
71 Views
Responding to the authorities’ decision to refuse some people the ability to disembark in Catania, Sicily, and efforts to push them back to sea, Julia Hall, Amnesty International’s Deputy Director at the Europe Regional Office, said Italian authorities must urgently allow all people on ship to disembark as soon as possible.

All the people rescued by Humanity 1 departed from Libya, were refugees and migrants are at constant risk of torture and other ill-treatment, arbitrary detention and other abuses. After attempting to cross the central Mediterranean on unsafe boats, they were rescued by the Humanity 1 and spent up to two weeks on the rescue vessel.

“The law of the sea is clear; a rescue ends when all those rescued are disembarked in a place of safety. There is no room for creative interpretations of the law when people are suffering and traumatized after risking their lives at sea,” said Hall.

“By forcing 35 people to remain on board the Humanity 1, Italy is not only violating its international obligations to disembark and protect them under both human rights and maritime law but also creating a risky situation which endangers the rescued people and the crew of Humanity 1. We urge the Italian authorities to allow all those still on board to disembark as soon as possible.”

“Hundreds of people on board other non-governmental organization rescue ships should also immediately be assigned a place of safety where they can disembark and receive assistance,” Hall pointed out.

“Italy legitimately expects other EU Member States to share responsibility for people seeking asylum, but this does not justify imposing measures that only increase the suffering of already traumatized people,” according to the Amnesty International official.