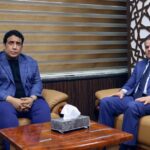 The two Libyan leaders discussed the repercussions of the dispute and ways of resolving it, according to a brief statement by Presidential Council.

Earlier this week, Deputy Prime Minister Hussein al-Qatrani and other government officials from Cyrenaica accused the premier of violating the political agreement and failing to ensure fair representation of the eastern region in his cabinet.

Al-Qatrani raised the possibility of forming a parallel government in the eastern region if Dbeibeh did not address these issues.

Dbeibeh to blame if parallel government created, says his deputy