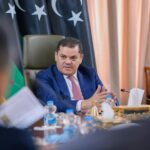 Prime Minister Abdul Hamid Dbeibeh decided on Wednesday to move the country’s Social Security Fund (SSF) from its offical headquarters in Benghazi  to the capital Tripoli, according to documents leaked to the press.

The newly Tripoli-based SSF will have its own budget, and will be allowed open up accounts in Libyan public banks as long as it has a main account in the Central Bank of Libya (CBL).

Founded in 2015, the fund was established in Benghazi to support small and medium-sized enterprises.

This move notably comes amid growing tensions between Dbeibeh and other members of his government from Cyrenaica who accuse him of consolidating power and undermining equal representation of the eastern region of Cyrenaica in the government.

0 0
Previous : Turkish surveillance plane over Libya coast
Next : 5+5 JMC to meet in Egypt for talks on foreign forces exit