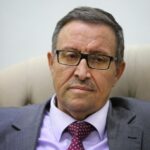 Deputy Governor of the Central Bank of Libya (CBL), Ali Al-Hibri, has accused “the current political class” in Libya of not showing any interest in the future of the country’s economy.

Speaking on Saturday at a conference on the economy’s diversity, Al-Hibri revealed that “half of the state’s reserves have been lost.”

The deputy governor called for reforming the banking sector, re-opening the stock market as well as forming a “scientific committee aimed at the economic development of Libya”.

However, Al-Hibri pointed out that no such reforms would take place “without a conscious political will that is free of corruption”.

0 0
Previous : Ministry of Social Affairs refutes reports of its refusal to pay children grant
Next : 867 new people test positive for Coronavirus, 13 others dead in Libya