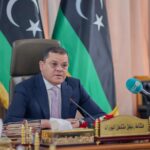 Libya’s House of Representatives voted on Tuesday to withdraw confidence from the government of Prime Minister Abdul Hamid Dbeibeh during a closed-door session in Tobruk, the House spokesman Abdullah Blehaq announced in a brief statement.

A total of 89 parliament members voted in favor of the move, out of a total 113 in attendance, he said.

This comes after the parliament agreed on Monday to form a committee to investigate the government. The committee was given a two-week deadline to present its findings.

The parliament has previously threatened to introduce a no-confidence motion against the government following a dispute over the state budget and other issues relating to national security, such as terminating military deal with Turkey and naming a defense minister.

Dbeibeh arrived in office after winning the votes of the Libyan Political Dialogue (LPDF) this year, as part of a political process sponsored by the United Nations.

As defined by the UN roadmap, his government had six-month mandate, during which it was tasked with protecting the ceasefire agreement, easing economic challenges and preparing for the presidential and parliamentary elections on December 24.