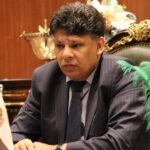 Libya’s Attorney-General in Belgium for talks on frozen assets

Libya’s Attorney General, Al-Siddiq Al-Sour, is in Belgium where he met on Tuesday with a number of state officials to discuss the Libyan assets frozen in Brussels.

According to a statement by Al-Sour’s office, he discussed with Belgian officials “assessment of the jurisdiction scope concerning investigations into managing the funds of the Libyan Investment Authority (LIA) in the Euroclear Bank.”

The Attorney-General also discussed with the Belgian side “the preliminary criminal measures” that Belgium took against Libyan nationals, according to the statement.

Earlier this year, Belgium issued an arrest warrant against LIA’s chairman Ali Mahmoud on charges of corruption and embezzlement.

0 0
Previous : MP: The new government will pave the way for the elections
Next : LNA Spokesman: Libya’s crisis is about security not politics